Our next Open Morning is on Saturday 16th October 2021. Register here to join us – Open Morning

An Act of Remembrance

This morning, the Prep School gathered in their year group “bubbles” to undertake our annual Act of Remembrance.

Fanned out around the flagpole near the entrance to the school, pupils and staff gave thanks to all those whose great sacrifice allowed future generations to enjoy peace and liberty. With 2020 marking the 80th anniversary of the Battle of Britain, we remembered those in particular who helped defend our skies from attack during this campaign. Although fought in British skies, it was not only those who called Britain home who gave their service and sacrifice in the Battle of Britain, with individuals from Poland, New Zealand, Canada, Czechoslovakia, Belgium, Australia, South Africa, France, Ireland, the United States, Southern Rhodesia, Barbados, Jamaica, Newfoundland and Northern Rhodesia all serving with the RAF. It was in honour of every one of these individuals, and all others around the world who have fought in war, that we carried out our service. 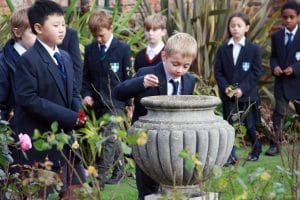 Our School and Boarding Heads gave four exceptionally assured readings, with Head Girl Pani delivering a reading on George Edwards from Kingston, Jamaica, who died as one of many who came from overseas to the help Britain in its hour of need, and Head Boy Theo reading to us from Micah 4:1-5. Heads of Boarding Ruby and Youmans then led an Act of Commitment to pledge our support for those who work towards peace and welfare around the world. We also listened as the Head read out the names of the former Junior King’s pupils and one school master who lost their lives in the Second World War. The service ended in a silent procession around the front of the Barn towards our Memorial Garden. Here, every pupil and member of staff placed their poppies in the urn at the centre of the garden.

Being together as a school in any way feels extremely moving at this particular moment. While we may have been kept separate by year group, coming together in one place to undertake this act of remembrance was a poignant reminder of the importance of unity as we reflected with gratitude on those who fought generations ago in the skies above Kent.