We are very proud to present our phenomenal Pre-Prep 90th anniversary mural, painted by talented artist Jane Tattersfield. Jane was commissioned to paint a Jungle Book-themed scene on a stretch of blank wall in the Pre-Prep department to commemorate our 90th year on the Milner Court site, which was opened by Rudyard Kipling in 1929. 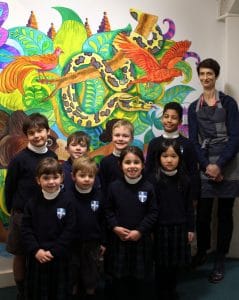 Kipling being a key figure in our school’s history, it seems fitting to have familiar characters from his classic novel gracing our wall. Shere Khan, Baloo, Mowgli, Kaa and others can now be seen strolling (and slithering) the hallway alongside Jane’s renderings of Pre-Prep pets Buttercup the rabbit, Bertie the tortoise and, swimming along the bottom of the design, our aquarium fish. The mural also includes four parrots, representative of our four school houses – Cockas, Kakas, Keas and Macaws – bringing that special Junior King’s touch to the work.

Jane has been working on the project since last term and it is her very first mural. Children and staff have been watching her progress with great interest and today a small group gathered excitedly to watch her paint the final strokes. We think the result is a magnificent celebration of our 90 years in Sturry, sure to be enjoyed by pupils for many years to come.