Our next Virtual Open Morning is on Saturday 16th January 2021. Register here to join us – Open Morning

Equipped with his five senses, man explores the universe around him and calls the adventure Science – Edwin Hubble

On Tuesday, Year 7 made the short journey from Sturry into the centre of Canterbury to enjoy their first taste of Science at the senior school. The annual Year 7 Science Afternoon, organised with the King’s School’s Science department, is a fabulous opportunity for the pupils to experience the excitement of a scientific education beyond the junior school curriculum. With the majority of Junior King’s pupils progressing to King’s at the end of Year 8, it’s also a great chance to get to know the campus and to meet their future teachers.

Having started their journey in Physics, Biology and Chemistry this academic year, Year 7 have been getting to grips with these subjects through plenty of hands-on study in the Junior King’s labs. Practical study is one of the foundations of our Science curriculum, from Pre-Prep through to Year 8, and this continues into the senior school setting, as our pupils discovered.

The afternoon was split into three classes, covering Chemistry, Physics and Geology. Aided by helpful, friendly King’s students, each class engaged its group of pupils in a practical experiment designed to inform as well as inspire. 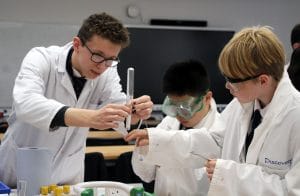 Things went pop and fizz in Chemistry, with pupils donning lab coats and goggles to test the reactivity of different metals in test tubes of acid. With the promise of a prize for the team that could order the different levels of reactivity correctly, everyone got down to work immediately with the help of the older students. This was a fantastic, hands-on look at how the components of the world around us can affect each other. If the cries if ‘cool’ were anything to go by, then the most impressive reaction was caused by the little strips of magnesium. When mixed with the acid, the magnesium produced hydrogen gas that was collected in a test tube by the older students. Holding a burning splint beneath the tube then created a very loud squeaky pop! 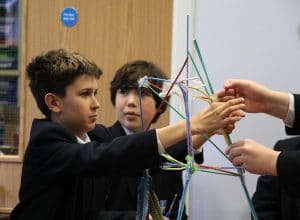 Moving on to Physics, Year 7’s construction skills were put to the test with a challenge to build a tower against the clock in small groups. Using pipe cleaners and sellotape, the winning structure would be the tallest tower that could hold an egg above the ground for ten seconds. Cue many earnest discussions on the relative merits of different shaped bases, ways to hold the egg within the structure and the best method to keep the tower stable. On testing the structures’ egg-bearing capabilities there were sadly a few yolks spilled, but there were also a number of triumphs. 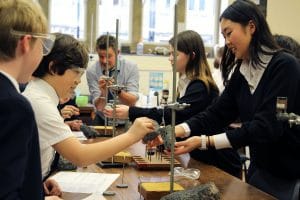 Finally, in a classroom filled with fossils, a replica dinosaur skeleton and an enticing sandpit, Year 7 were given their first taste of Geology. With the challenge to put themselves in the shoes of geologists in Montserrat, the class had to work out when to evacuate residents in advance of a volcanic eruption. The scenario was simulated through a set-up featuring a clamp holding a party popper (the “volcano”); a weight holder was then attached to the string of the party popper, with each weight added to this representing one day. Split into groups, the pupils then had to establish how many “days” it would take for the “volcano” to explode. The room was soon full of pops and coloured string as the eruptions commenced! With excitement already high, the session closed with two surprises: the chance to take home a small fossil and the opportunity to hold a rheomorphic ignimbrite from a supervolcanic eruption. Approximately 129–132 million years old, this amazing specimen is the only one in the world to be owned by a school!

It was clear to see how much the pupils enjoyed their trip to the “big” school down the road, and it’s wonderful that our close links to the senior school can provide benefits to our pupils through events like this. In just over a year, many will be back in these same labs to continue their adventure in Science.

Read more about Science at Junior King’s and the King’s School.