Our next Open Morning is on Saturday 19th March 2022. Register here to join us – Open Morning

Year 5 kicked off the new week in Art on Monday by putting down their pencils and getting messy with a different medium: clay! As part of their recent studies into William Morris, pupils have been designing their own Morris-inspired mugs, and on Monday they got the chance to begin work on bringing these to life. Visiting from The King’s School with her pottery wheels, ceramics teacher Gillian Farrell took Year 5 through how to use the wheel and how to “throw” the spinning clay into the basic pot shape that will be the foundation for their mugs. Very impressed by the demo, which prompted gasps and cries of ‘sorcery!’, Year 5 donned aprons and rolled up sleeves to have a go at throwing their own lumps of clay. 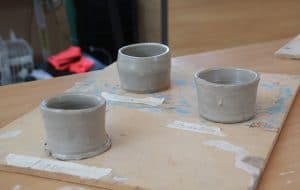 The children took to the wheels quickly and made some fabulous little pots, while the final of the most recent series of The Great Pottery Throw Down played in the background for inspiration. Handles, decorations, glaze and other finishing touches will be added later and there was much excitement about transforming the little stony grey pots into colourful Arts and Crafts inspired mugs. With handling the clay on the wheel described by one pupil as ‘the most satisfying thing ever’, it could be that some future ceramicists have had their first taste of the discipline this week!

To learn more about Art at Junior King’s, click here.