The stage is set for Peter Pan Jr

Lights up! It’s time for Middle School to tread the boards (and walk the plank) in their production of Peter Pan Jr.

Six months in the making, the cast have been hard at work in their dress rehearsal today. Mics have been tested, costumes have been tried on and admired, and scene changes have been practised ahead of tomorrow night’s opening performance to parents in the Barn. 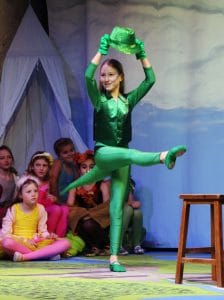 Based on the play by J. M. Barrie and the 1953 Disney film, Peter Pan Jr is a modern version of Barrie’s timeless tale of childhood, responsibility and growing up. The cast were full of excitement this morning as they brought the story’s elegant fairies, dastardly pirates and gangs of feral children to life. With the stage decked out to represent everything from the Darling children’s bedroom to the Lost Boys’ den and the high seas of Neverland, the production is set to be vibrant and fun, full of fabulous song and dance, with a number of ingenious set pieces thrown in (watch out for the puppetry!).

In addition to the performance itself, pupils’ hard work will be evident in the details of the props, costumes and set, all of which have seen input from the children themselves. The stage crew, too, is comprised of pupils, making the production a real team effort and something for everyone to be proud of, no matter what role they have played in the creation of the final product.

With the pupils having been wished luck today by director (and Head of Drama) Mrs Öbo, the only thing left to do is to look forward to welcoming our audience to our vision of Neverland. Watch out for crocodiles!